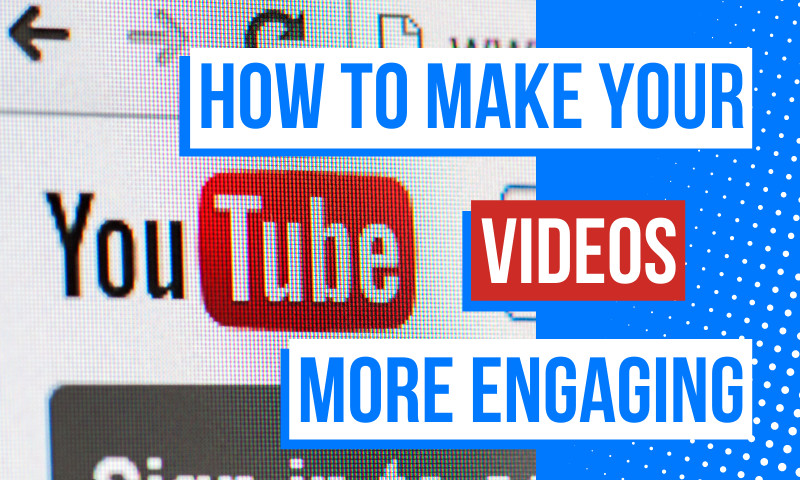 With everything going digital, there are an unprecedented number of things competing for people’s attention on YouTube. From big brands releasing promotional videos, to established YouTubers and even movie or TV celebrities trying to make the transition to online, people have more choice than ever before when it comes to what videos they’re going to watch!

If you’re just starting out and looking to grow your channel you need to rise to the top, make people click and then keep them engaged and watching your videos for as long as possible to show YouTube that your content is valuable and worth promoting!

In this article, we figured we’d give you a couple of pointers to help you do just that:

1. Add a hook right at the start of your videos

This first tip is something that most big YouTubers always do, yet smaller channels seem to ignore.

As a YouTube video creator, it’s important to remember that most people make up their mind on whether or not they want to watch your video during the first few seconds of the clip.

That’s why, when writing your scripts, it’s important to add what is usually known as a “hook” to the beginning of your video. The hook is something that will grab the viewer’s attention and make them want to watch your video further.

Typically, a good thing to use as a ‘hook’ is something exciting that happens later in your video, like a suspenseful moment or a joke that sounds funny even out of context.

Don’t spoil the video though! The hook should be intriguing enough that the viewer wants to watch your video further, but you shouldn’t put the most exciting part of your video right at the start.

Similarly, don’t deceive your viewers! It’s easy to take a part of your video out of context and place it at the start to make it look like something crazy is going to happen. It’s a trick that reality TV shows have been doing for a long time.

However, if the viewer watches the whole clip and realizes that nothing crazy actually happens, they’re going to be upset (and rightfully so!). That’s not something that you want to do. Upset viewers will hurt your channel a lot more than a low Audience Retention rate.

Dislikes, negative comments or a high number of subscribers leaving are signs that let YouTube know that people don’t like your clips, so your videos are going to end up buried by the algorithm!

2. Use Calls to Action

You know how we said that YouTube takes certain things as signs that people don’t like your videos? Well, the opposite is also true!

Comments, likes, shares and subscribers gained are things that lead YouTube to believe your video is good!

Also known as “engagement signals”, these things show YouTube that people not only watched your video, but that your content resonated with them enough to make them engage with the YouTube platform, be it by participating in a discussion in the comments section, or by clicking the share button to show the video to their friends.

Calls to Action are verbal or visual cues that encourage viewers to perform a certain action or set of actions. In our case, the Calls to Action would encourage people to like our video, share it with their friends and subscribe to our YouTube channel.

Adding a verbal Call to Action to your clip is pretty self-explanatory: just remind people to do it! Every successful YouTuber does it, you’ve probably heard it hundreds of times before.

For visual Calls to Action, things can be a little trickier. When talking about YouTube videos, visual Calls to Action are usually little animations that pop up on screen to remind people to like the video and subscribe. They’re stylish and unobtrusive, making them perfect for use in the middle of a clip.

The only problem is that making your own Like and Subscribe animations can be difficult. Animation usually requires years of study and practice to get right, not to mention expensive software like Adobe After Effects.

Flixier solves this issue by providing you with a library of hundreds of customizable motion graphics that you can add to your videos. No animation knowledge required! Just choose the one that you think looks best and drag it over to your video:

3. Add some background music to your videos

If your videos feature a lot of talking, especially between multiple people, adding some background music can help keep people engaged and fill out some awkward silences that might make viewers click away.

Adding music to your videos in Flixier is as easy as dragging and dropping it over to the Timeline.

If you don’t want to make or buy your own music tracks, you can just browse our library of free tracks by going to the Audio tab.

Be careful when using music in your videos though! It’s important that the track you choose matches the atmosphere and mood that you’re going for in your video.

You should also make sure that your music doesn’t make your voiceover difficult to understand! Make sure to lower the volume down to a reasonable level and use the equalizer to tone down frequencies between 125 and 4000 Hz (the sounds that would overlap with the human voice).

4. Cut out anything that’s unnecessary

Because YouTube tends to favor videos that are 10 minutes or longer, you might be tempted to pad out your clips in order to get a longer runtime. However, that wouldn’t be wise!

Longer clips aren’t going to do any better if they have a low Audience Retention rate. That means that a longer video still needs to keep people engaged and watching throughout most of its runtime in order to get suggested and pushed to the top of the search results.

Stuffing your videos full of irrelevant information and unnecessary talking just to reach that 10 minute mark will make people back out of the video or click on something else. If you want people to watch your videos until the end, the best way to do it is tight editing and cutting out anything that’s unnecessary!

There you have it! That’s 4 ways for you to make your videos more engaging and speed up your YouTube channel growth!

So, what are you waiting for? Head over to Flixier.com and start working on your content now!

Remember: the fastest way to make it big is to start making videos as soon as possible!