The 5 things you need to start streaming on Twitch 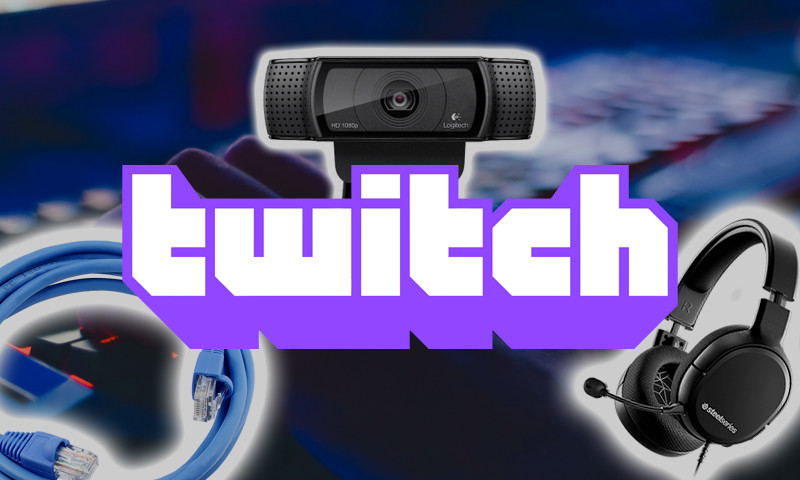 For a lot of people, streaming on Twitch can be deceivingly difficult. Watching more experienced streamers makes it look easy, but starting your own Twitch channel can be a daunting experience.

And to a certain extent, that’s perfectly normal. It takes most people some time to get used to talking to the “camera”, not to mention that constantly putting yourself out there for the world to see and creating live content is not an easy task.

What you might find surprising is how many people quit before they even start their first stream. The “technical” aspects still stump a lot of people and with streaming being more popular nowadays than ever before, it’s easy to get bogged down researching software, plug-ins and expensive gear that’s supposed to make your life easier but ends up being more confusing if you don’t have any experience.

This article will help you navigate the sea of “streaming gear” reviews out there and show you the necessary tools to achieve a quality stream while spending the smallest amount of money possible.

So, without further ado, here are the 5 things you need to start streaming on Twitch:

This is pretty straight-forward, but a lot of people fail to consider it, especially when streaming from consoles. In order to make sure that the sound of your game doesn’t get picked up by your microphone, creating echo (or even worse, a loud screech), you need to wear headphones, preferably closed-back.

The term closed-back refers to the outer part (the “shell”) of the earcups being one solid piece of plastic rather than a perforated mesh. This provides more sound isolation for the listener but most importantly in our case, keeps the sound of your gaming session from “leaking” and getting picked up by the microphone.

Luckily, the majority of gaming headsets, especially cheaper ones are already closed-back, so you won’t have to look hard to find a pair.

If you want a solid, budget option that is guaranteed to work out-of-the-box with all of your devices, from desktop computer to consoles (including the Nintendo Switch) then the best recommendation is the Steelseries Arctis 1.

The reason we chose to recommend the SteelSeries Arctis 1 are as follows:

The last part might not seem like the big deal, but trust us, being able to quickly turn off your microphone during a stream is incredibly useful, especially if you have to take phone calls or deal with loud roommates who may not know you’re live.

No matter how good your internet router is, streaming on Wi-Fi is never a good idea. Even if your device is right next to the router, you might still get interference from other devices causing you to occasionally lose connection, not to mention that you won’t be able to take advantage of your full internet bandwidth using Wi-Fi.

So many problems like stream audio cutting out, image freezing, drops in video quality or other stutters can be prevented by connecting your computer or console to the internet using an Ethernet cable.

All you need to do is plug one end of it into the Ethernet port on your device and the other end into one of the numbered ports on the back of your router and you’re guaranteed to have a much smoother stream, not to mention less lag and considerably faster download speeds, all for the price of a couple of dollars or less.

Having a webcam is obviously optional and depends on what you’re planning to do on your stream, but since they’re so popular with both streamers and audiences, we decided that the topic is worth covering.

On Xbox or PC, your best options are the Microsoft LifeCam HD-3000 or the Logitech C920.

These are both great cameras, the main differences between the two being the price and image resolution. The Logitech C920 is generally considered one of the best webcams available and records at a Full HD resolution of 1080p, while the Microsoft LifeCam only goes up to 720p.

The Microsoft LifeCam can usually be bought for less than half the price of a Logitech C920, however, so if you’re on a tight budget (and especially if most of your screen will be taken up by the game you’re playing),  then the Microsoft LifeCam will definitely give you the most bang for your buck.

Most importantly, both cameras are compatible with the Xbox Twitch app (which only supports certain webcams, as you can see here ).

If you’re on PlayStation, then your only option is to buy a PlayStation Camera, because the console is unfortunately not compatible with regular, off-the-shelf web cameras.

It’s also worth noting that because the PlayStation Camera doesn’t use USB, it only works with PlayStation consoles and isn’t compatible with computers or other devices.

Using your phone as a Webcam

If you're on PC and you don’t want to spend money on a webcam, using your smartphone as a camera is also a possibility (and given how good phone cameras are nowadays it might even result in better image quality).

There are multiple apps (both free and paid) that allow you to do this, but in my experience, Iriun Webcam works best. The app is free for both Android and iOS. To use it, you need to install the app on your phone and the desktop client on your computer.

If your computer and phone are on the same network, then the camera will work over Wi-Fi. If you want to ensure the least amount of delay or lag possible, then connect your phone to your computer with a USB cable and use Iriun that way.

Obviously, this method of using your phone as a camera has its downsides:

If you’re willing to make those sacrifices, however, using your phone will help you save a good chunk of money and provide great video quality when you’re just starting out.

Open Broadcaster Software, commonly referred to as OBS, is the most popular streaming and screen recording software. To put it simply, this is the program that lets you share your computer screen and audio with your audience on Twitch. All you need to do is go to the official website, download it, install it and then watch a short tutorial video showing you how to configure it properly.

Don’t be scared by the complex interface or the multitude of options. OBS is easy to figure out and learn, and because the software is so incredibly popular in the streaming community, you will always find answers for your questions by asking online.

If you plan on streaming from an Xbox, then what you need is the Twitch app. You can download it to your console for free from the Xbox Store.

PlayStation streamers won’t have to install anything, as the PS4 has Twitch streaming capabilities straight out of the box. If you’d like to read more about how to stream from your PS4, then feel free to read our guide on it!

If you want to be successful on Twitch, you can’t rely only on people discovering your streams via Twitch’s algorithm. You need to promote your content through any available channel!

This is where Flixier comes in! Our online video editor will help you turn your Twitch clips, VODs and Highlights into videos that you can easily share online. Our Twitch integration means that you don't even have to wait around for the huge VODs to download to your computer! You can just import them to your Flixier library straight from the Twitch servers and start editing your clips. The editor comes with preset formats optimized for YouTube, Instagram feed videos or vertical videos such as YouTube shorts, TikToks and  Instagram stories, so you don't have to worry about having to fiddle with the settings too much.

And the best part, especially if you're a console gamer (or if your computer isn't too beefy), is that  Fflixier renders videos online, which means that your clips will always be ready in a couple of minutes regardless of what you're editing them on. This will save you dozens of hours of waiting around for rendering to be done and allow you to focus on what really matters: streaming and creating more content.

You can also learn more about using YouTube to grow and promote your Twitch channel by reading the guide that we wrote a few weeks back!

Thank you for reading this until the end! We hope this post cleared up any confusion you might have had about streaming gear and motivated you to go out and start your own Twitch channel.